Did you know that it’s totally possible to forget excrutiating pain in only a year and a half?

No, I’m not talking about birth.  Birth only lasts for a few days at most.

I’m talking about cramps. Cramps last at least twice that, and nobody tells you you’re a hero afterwards either.  And they happen every bloody month!  Pun intended.

What to do when you are so bloated and sore you can’t even contemplating wearing the baby? You eat lots of painkillers, strap baby to her lovely car seat and go for a stroll. And if it’s raining? Said stroll goes to the mall! Yay!

I have to say, as I rarely use the pram, it was actually quite nice to be face to face for once, and Bolle clearly loved it. It brought so much excitement and smiles that she in fact passed out before we got around to the actual errand of our outing, which was grocery shopping.

We did a quick posing visit to the mall’s changing room, and the people there most likely thought I was nuts, as I went in, brought out a massive camera and then left again. 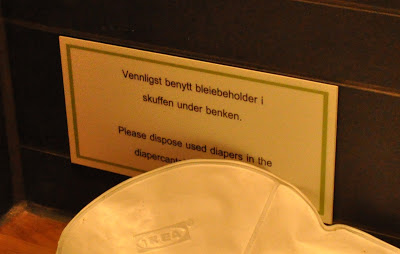 Stavanger Storsenter has enjoyed a facelift lately, which has been branded «Face/Lift», clearly a pun on the movie «Face/Off», which I’m sure none of its core audience actually remember, which makes the whole marketing exercise rather entertaining.

The important thing is, though, they’ve pretty much nailed it with the baby changing facilities.

I think they have realised that mums on leave are a great target group.  They have dispensable income, and lots of time to waste in shops.

The changing rooms are right next to the downstairs cafe, which has rapidly become a popular hangout for boob flashing, fresh-off-the-boat mums.

You go through one glass door, and there is a seating/feeding area with two comfy leather armchairs for bf-ing, and a microwave for the bottle feeding fiends.   It’s I’ve repeatedly attempted photographing these chairs, but it’s impossible as they are always busy.

From that seated area you can enter a mummy toilet or a changing area.  The latter is separated from the feeding area only by a glass door, so your actions can be watched by all.  However, this makes it feel nice and spacious and less claustrophobic than most other changing rooms.

This is the first changing room I’ve visited where care has clearly been taken to match the interior design of the rest of the mall.  The frosted glass pattern, colour of the tiles and even the shape of the tiles seen below the mirror in the photo, they all match decorations elsewhere in the mall.

If nothing else, you feel valued as a diaper changing customer.  It is all rather stylish, even if it looks a bit like a cross between a bachelor pad, a night club and a very uninventive interior design / yummy mummy blog.

More importantly, the facilities are good.  There is an inflatable IKEA changing mat which does wonders for preventing baby from rolling off the counter, there are paper tissue dispensers and soap nearby, as well as a sink within reach.  There is also a dedicated dirty nappy drawer, which goes some way to limit smell.

And the lucky disabled people, they actually get their own toilet, not having to share with a gazillion mums and dirty diapers.  Kudos.

The only drawback is that the yummy mummy who was in there before me (and she took AAAAGES!!) left a puddle of pee in the corner of the inflatable mat, for Bolle to explore.  Thanks a lot.  I know reaching for the tissues 10 cm away was a bit much for your high heeled, tight-jean-wearing self.  I hope you step in dog poo on the way home.

VERDICT:
Niiice.. Although you are nappy changing on display, so hone your skills.  Not for the L1 Nappy Changer, perhaps.

Breast feeding facilities: Great.  Comfy seats shaped to give maximum privacy.  Also caters for bottle feeders, which is friendly of them as well as rare.  Only drawback is that the feeding area is pretty much in the corridor outside the changing rooms and toilets, which means it’s usually quite a busy area although people make an effort to be quiet.  For Bolle this means not much drinking, lots and lots of thinking (about bypassers, with staring).

Parent peeing facilities:  None, but there are some right nextdoor.

Worst feature: Not the cleanest, though I’m uncertain how much of that could be blamed on the mall, and how much on that lady mentioned above.

Would I use again?  Yes.  Even for feeding.

Bolle says: «What do you mean don’t drink the yellow stuff?»‘


Bolle wears:  Hoodie and wool mix leg warmers from H&M.  Wool socks from Sparkjøp.  Trousers from Lindex (almost too small and they don’t do them in larger sizes!  Sob!)