This is a stupidly simple idea and you could probably make them yourself, but I found these on a toy store counter and bought a pack.

Basically it’s a nylon band with a hoop in one end and a button at the other, allowing you to strap toys to your child travel modicum of choice.

Our Sophie le girafe Francais never leaves the home without one, and as a result she has not suffered the fate of her cousin, who was tragically lost by my friend’s daughter at an unknown location in France.  Perhaps she jumped ship to aller a Paris toute seule.

Wearing a toy tie does make Sophie look as if she’s about to be hanged for squeaking too much, but this doesn’t appear to worry her. 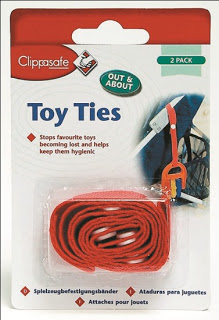 As a bonus, Bolle really loves chewing on the actual toy tie.  I’ve thought of washing them, but then maybe they’d lose their juice, and you wouldn’t want that.

Clippasafe, the company that makes what I believe is the original toy tye (correct me if I’m wrong), also makes a lot of other scaredy-parent products such as baby harnesses.

But let’s not think about that, and celebrate the fact that you might never have to bend over again to pick up your Brio rattle.